THE TESTIMONIAL OF THE ETHIOPIANS ON THE HOLY COVENANT

We, Children of Ethiopia, believe in our Ethiopianhood of the Holy Covenant that embodied and conserved the Seven Divine Covenants GOD Igziabher granted to humanity, men and women.

Our God Igziabher, in the Era of the Genesis, founded the Ethiopian Living Human Entity, primarily, on the Covenant of the Soul of the Male and the Female, through the Matrimony of Adam and Eve. Then, He raised it, through Noah's Rainbow, Melchizedek's Offering and Abraham's Circumcision, to the next stage of its eschatological growth.

In the transitional Era of the Old Testament, He developed it, through Mose's Ark and David's Throne, to the finishing level that caused to bring about, under the Covenant of the Law, the genealogical union of the Ethiopian Queen Makkedda and the Israelite King Solomon.

Finally, in the Era of the Everlasting Life, He brought it to completion with the Sacrificial Body and Blood of His God Son Jesus Christ, born of and incarnated from The Goddess Mother Virgin Mary, who is the pure seed descended from that preordained genealogical union, thus culminating in the Ethiopian Person with the Eternal Crown of the Covenant of the Holy Spirit.

We believe that Ethiopia, as such, represents the Kingdom of God Igziabher, embodied in the unity of the person of the Male and Female Ethiopians of the Holy Covenant, each constituting the three Houses of the People, of the Government and of the Priesthood achieved through Her Precepts of TEWAHDO [Unity in Duality and Trinity].

We believe that God The Son Jesus Christ, in Whose Name, meaning "Christ", we are called "Christians", is our Eternal Priest and King, in the Order of  Melkizedek, the Ethiopian, who, born of the triple Seed that sprung from Shem, Ham and Japhet, appeared in the beginning of time as The Precursor and Image of God The Son Jesus Christ.

We believe that The Goddess Mother Virgin Mary, Who is the Personification of Ethiopia, and in Whose Name we are called "Children of Ethiopia", and  as One Who Bore God The Almighty, is the Tree of Life, the True Mother of the Living, the Eternal Ark of the Covenant, and our Queen in Heavens and on Earth.

We believe that the Tri-Coloured brilliant Banner of Green, Yellow and Red, symbolizing those dominant colours of the Sign of the Rainbow, is our Eternal National Flag entrusted to us by Our Creator God Igziabher through The Covenant of Noah.

We believe that the Prophetic Word that reads: “Ethiopia Reaches out Her Hands to God Igziabher!” and attributed to The Goddess Mother Virgin Mary, and the Divine Word that says: “The Triumphant Lion of the Tribe of Judah!” and ascribed to God The Son Jesus Christ Who is the Ultimate Manifestation of the Holy Covenant, and that both Words of the Holy Spirit are Our Eternal Divine Seal we received from Our God Igziabher, as a Nation of The Holy Covenant.

We believe that the Crowning and Exaltation of our Spiritual Birth from God Igziabher, through the Grace of The Holy Covenant in the Holy Spirit and Fire, entitled us to be Heirs (kings and queens) and Servants (priests and priestesses) of the Kingdom of God Igziabher.

We believe that, in order for us to maintain such Divine birthright privilege, to confirm our inheritance of God Igziabher's Kingdom and to continue rendering our pertinent services, it is our constant commitment to Absolve our Sins through Incessant Repentance and Partake the Holy Communion of Our God The Son Jesus Christ that He incarnated from The Goddess Mother Virgin Mary.

We believe that it is our God Igziabher Who, in accordance with His Word of The Covenant, inscribed in our hearts, taught us and made us to preserve in our lives this Ethiopianhood, Which is the Embodiment of the Holy Covenant.  Amen.

Tags:
The Ethiopian Testimonial of The Holy Covenant 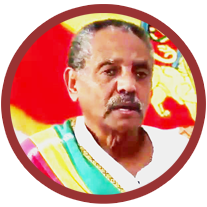